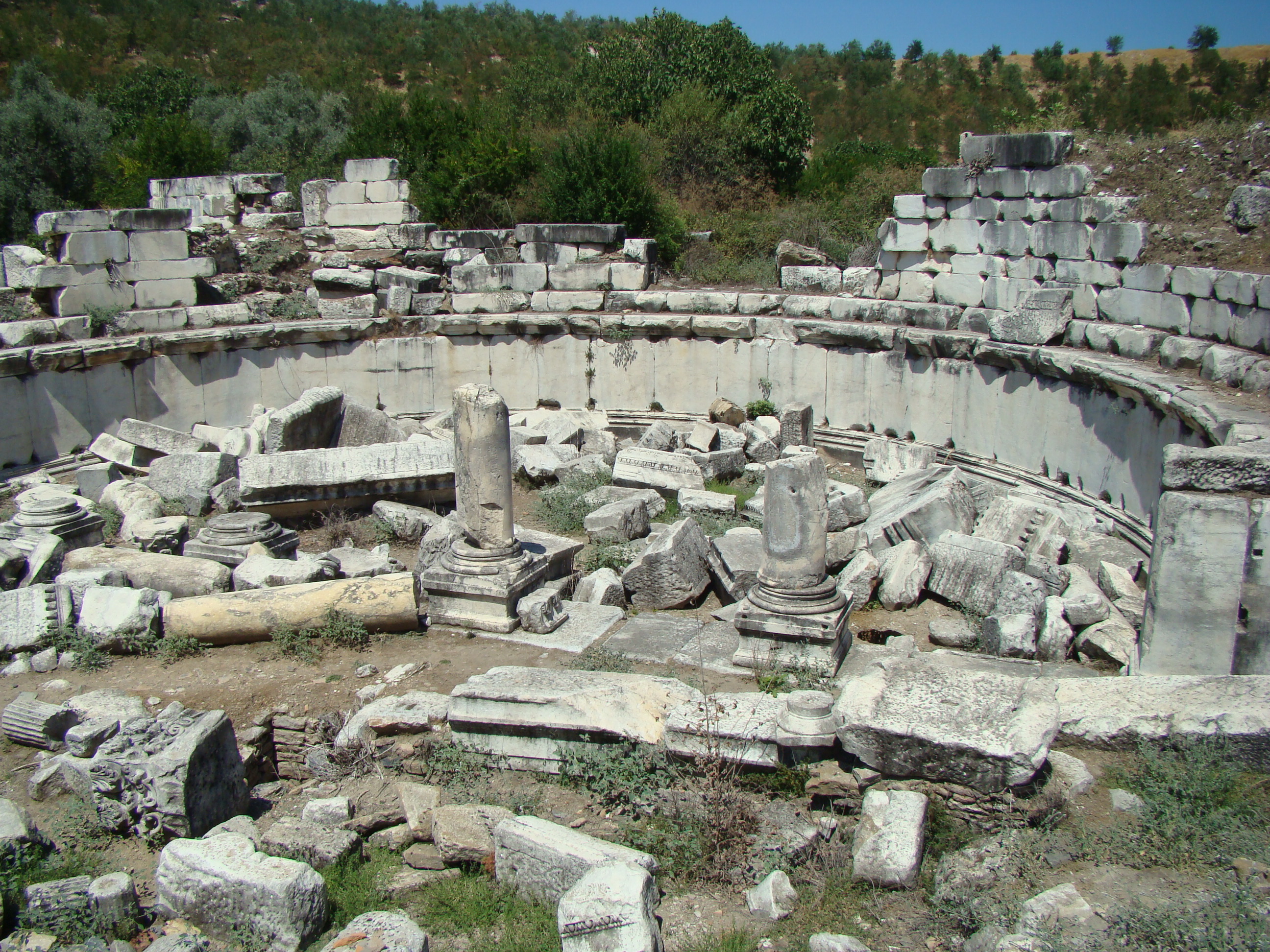 If you wish to visit Stratonikeia, then you will almost certainly have it to yourself  – there are no organized tours. Despite that, it is relatively close to Yenice, and well worth a visit – albeit a relatively short one compared to some of the other sites.

Unlike most of the coastal sites, which were slowly deserted as the area silted up, being well inland Stratonikeia was in use as a village until well into the middle of the 20th century, when it was deserted due to the next door lignite mine.

This considerably adds to the interest of Stratonikeia. As well as ancient ruins, there are relatively modern ones too, including a mosque and a shop/workshop, and the lower levels of the walls of the modern buildings are made by reusing the ancient stones, columns, etc. Recently restored and open to the public is an Ottoman bathhouse, right at the beginning of the site. And there is a fascinating ancient arch in the middle of a working farmyard! Whilst this is probably not very sound archaeologically, it does make for an interesting stroll round.

In recent years, significant excavation has taken place here, and is ongoing. As well as major structures such as the gymnasium and the bouleuterion (council house), interestingly right next to the modern ‘town hall’, the city walls are also still fairly obvious, as is the theatre – recently restored and made safe - which seated 15,000 in its heyday. The route out to the theatre takes you past a recently restored Olive Oil factory. It is well worth a climb to the top of the theatre, partly for the views over the site, and partly for the ruined temple behind it. At the bottom of the theatre, excavation has revealed ancient pipework still in excellent condition.

The agora by the bouleuterion has also been subject to recent work, and now shows ancient gates and roads, as well as many interesting inscriptions (Diocletian's Price Edict) still visible around the walls, and, of course, the Ottoman structures around it. Recently uncovered by the south gate are Roman toilets, and a very impressive sarcophagus.

​Like most sites, there is little shade here, although there is a small cafe near the mosque where you can get drinks and ice-creams, and some lovely gözlemeÂ stalls run by the local village women. There are also somewhat limited toilet facilities. You will almost certainly have the whole site to yourself (the odd farmer/archaeologist notwithstanding), and the entry cost is minimal, if anything. And you can at least park your car in the shade.

By the main gate there is a good map of the site, which is worth studying, as there are some areas, eg, the North gate, that you will almost certainly not see unless you know where to look. The easiest route round is Ottoman baths (has a good introduction to the site and its history), mosque, gymnasium, North gate, agora, bouleuterion, theatre, temple, South gate (and

Stratonikeia is probably not worth a whole days outing, but its location makes it suitable for a stop-off on the way to Bodrum (town or airport), or for combining with a trip to Muğla – either for the market, the wonderful cake or köfte shops, or perhaps an afternoon or evening in the Haman to clean all the dust off.

Head back to the main road on the Northerly route, and turn left towards Muğla , and then at the main Muğla traffic lights take the D550 towards Aydin and Izmir. At Yatağan, take the left turn onto the D330 towards Milas and Bodrum. Stratonikeia (some maps etc spell it Stratoni Kya) is approximately 10 km along this road on the right. You cannot miss it, it is preceded by a power station that is a throwback to the ‘dark satanic mills’ and which spreads for several kilometers along the road. Once you are past this, you will see the deserted village on your right followed by the Stratonikeia signpost which points down a right turn taking you back towards the village. Follow the track past the wooden hut and then park in the shade under the trees 50 meters further on (the mosque is to your right), where a ticket seller may or may not come and find you.

(Note that this is the route to Bodrum airport, so if you flew in this way you will have passed it on your way to Yenice.)

Total distance from Yenice is about 55 km, allow around 1 hour at the outside.